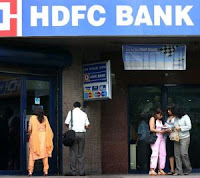 Analysts, on average, had expected a net profit of Rs 14.3 billion for HDFC Bank, which is also listed in New York , according to Thomson Reuters I/B/E/S.

The lender reported steady asset quality, with the ratio of net non-performing assets to net advances at 0.2 per cent as of end-March, unchanged from a year ago period.

The Reserve Bank of India reduced rates by an unexpectedly sharp 50 basis points on Tuesday to boost the sagging economy, which has fuelled expectations of increased demand for credit from corporate as well as retail customers.

Rates were raised 13 times by the central bank between March 2010 and October 2011 to contain price rises, putting pressure on some Indian banks' asset quality and slowing down the pace of credit growth in Asia's third-largest economy.