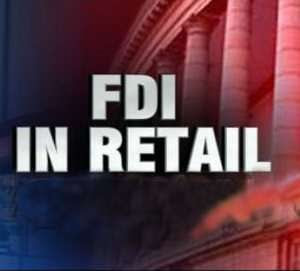 NEW DELHI: FDI in multi-brand retail without adequate safeguards will lead to widespread displacement and poor treatment of Indian workers in logistics, agriculture and manufacturing, the government today cited a global report on Wal-Mart as having said.
Minister of State for Commerce and Industry Jyotiraditya Scindia informed the Rajya Sabha in a written reply, that Switzerland-based UNI Global Union has presented a paper on 'Wal-Mart's Global Track Record and the implication for FDI in multi-brand retail'."The paper dwells on the business practices of Wal-Mart in some countries and concludes that without adequate safeguards put in place, FDI in multi-brand retail will lead to widespread displacement and poor treatment of Indian workers in retail, logistics, agriculture and manufacturing," he said.The US-based world's largest retailer Wal-Mart has already established its presence in the Indian marketthrough a wholesale cash and carry stores.It is among several other global chains waiting for implementation of the government decision to permit 51 per cent foreign direct investment (FDI) in multi-brand retail.The Cabinet decision of November 24, 2011 could not be implemented in the face of strong opposition from UPA ally Trinamool Congress and several state governments.Scindia also said that 11 states and union territories have conveyed their support to the Centre for opening the sector to foreign investment.In an another reply, Scindia said that a writ petition has been filed by Vandana Shiva, an NGO activist, in the Delhi High Court alleging that Bharti Wal-Mart and Bharti Retail are directly and indirectly carrying out retail trading in multi-brand in violation of the FDI policy."The matter is sub-judice," the minister said. Bharti Wal-Mart is a 50:50 joint venture between Wal-Mart Stores Inc and Bharti Enterprises that operates wholesale stores in India.The company currently operates 17 wholesale cash-and- carry stores under Best Price Modern Wholesale stores in India.