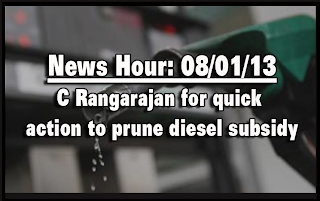 The government should act quickly to raise diesel rates to bring them in line with global prices in order to reduce its subsidy bill, Prime Minister's Economic Advisory Council Chairman C Rangarajan has said.
"I think we need to cut subsidies' proportion of GDP... Therefore, there is an imperative need to reduce the diesel subsidies," Rangarajan told PTI in an interview.
"Therefore, we should act quickly on it... The need to adjust domestic prices in line with crude prices globally has become absolutely essential," he said.
The crude oil price is around $95 per barrel. Diesel prices may have to be raised by Rs 10 a litre over the next one year, if government accepts the recommendations of Vijay Kelkar Committee.
The committee, which was appointed by the Finance Ministry to formulate the fiscal consolidation roadmap, had in its report suggested raising diesel and kerosene rates.
The price hike is being considered as the government scrambles to find ways to meet an unprecedented Rs 1,60,000 crore deficit expected this fiscal on selling diesel, cooking gas (LPG) and kerosene below their production cost.
Price of diesel, which currently costs Rs 47.15 per litre in Delhi, was last revised on September 14 when it was hiked by a steep Rs 5.63 per litre.
State-owned oil companies currently sell diesel at a loss of Rs 9.28 per litre and the hikes over the next 10 months will eliminate all of the losses and absolve the government from providing any subsidy on the nation's most consumed fuel.
They are likely to end the fiscal with a revenue loss of over Rs 1,63,000 crore on sale of diesel, LPG and kerosene at government-controlled rates that are way lower than cost.
Of this, close to Rs 60,000 crore will come from upstream companies ONGCBSE 0.83 %, OIL and GAIL IndiaBSE -0.67 %. For the rest, the Oil Ministry has asked the Finance Ministry to give cash subsidy.