BMA Inspiration: 'The Bollywood himself' The story of Amitabh Bachchan. 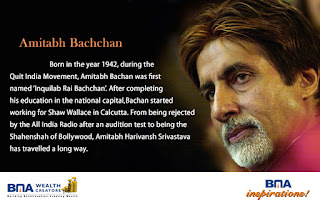 Amitabh Bachchan’s trademark deep baritone voice, tall, brooding persona and intense eyes, made him the ideal “Angry Young Man”, setting him apart from the cluster of Bollywood’s lover boys. However, his unconventional looks did work against him at the beginning of his Bollywood career, but he stayed around long enough to be become the icon of the Indian film industry.
Amitabh Bachchan was born in Allahabad in 1942, to Dr. Harivansh Rai Bachchan and Teji Bachchan. Bachchan was initially named Inquilaab. However, at the suggestion of fellow poet, Harivansh Rai changed the name to Amitabh which means, “the light that would never go off.” Though his surname was Shrivastava, he replaced it with ‘Bachchan’, which was his father’s pen name. Amitabh Bachchan studied in Allahabad at Jnana Pramodhini and Boys High School. He completed his education at Sherwood College in Nainital and Kirori Mal College in Delhi. His first job was in Shaw Wallace. Amitabh later worked as a freight broker for a shipping firm called Bird and Co., in Kolkata, a job he quit to pursue a career in acting.
In 1969, Amitabh made his debut with Saat Hindustani, which won him the National Film Award for Best Newcomer. After this came movies like Reshma Aur Shera, Parwana, and Anand in 1971. He made a huge impact with his performance in Hrishikesh Mukherjee’s Anand alongside Rajesh Khanna, winning him the Filmfare Best Supporting Actor Award. His breakthrough as a lead was in the film Zanjeer (1973) which established his persona of the “angry young man” of Bollywood. Amitabh reworked the image of the Hindi film hero with major hits like Deewar, Sholay, Trishul and Don. He popularised the violent melodrama genre but had an equal flair for tragedies (Muqaddar Ka Sikandar, Shakti) and comedies (Chupke Chupke, Amar Akbar Anthony) as well. His status as a demi-god was evident when the entire nation prayed for his recovery when he met with a fatal injury during the making of Coolie in July, 1982.
In 1984, Amitabh entered politics in support of long time friend Rajiv Gandhi. He contested Allahabad’s Lok Sabha seat and won by a huge margin. Accusations of him being involved in the Bofors Scandal made him quit politics, although, later on, he was proved innocent. Amitabh returned to films with blockbusters like Shahenshah, Agneepath, Hum and Khuda Gawah. A series of flops in mid 90’s and the collapse of his company, Amitabh Bachchan Corporation Ltd. landed him in immense debts. He returned back to movies but with no success.
In the year 2000, he stepped up to host the television show Kaun Banega Crorepati and later was seen in Mohabbatein along with Shah Rukh Khan. Both these ventures proved extremely successful. Since then Amitabh has been on a roll. At sixty plus, with all the endorsements and accolades, he is a greater icon than he was at the height of his popularity three decades ago.
In recent past we have seen Amitabh doing vastly different roles in fims like Sarkar Raj, The Last Lear, Paa, Teen Patti and Bbuddah Hoga Terra Baap.
He was last seen in Prakash Jha’s  Aarakshan in 2011, the film failed to do well at the box-office but Amitabh’s role was widely appreciated.